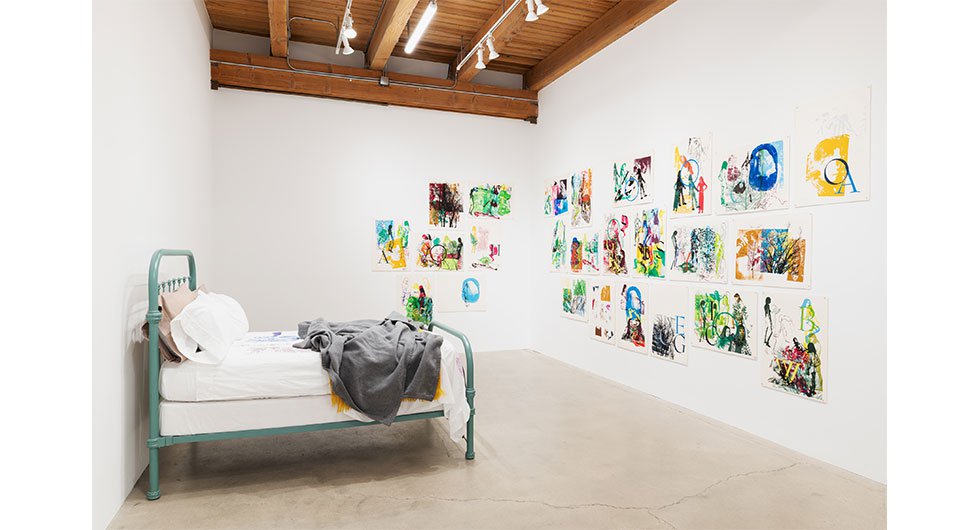 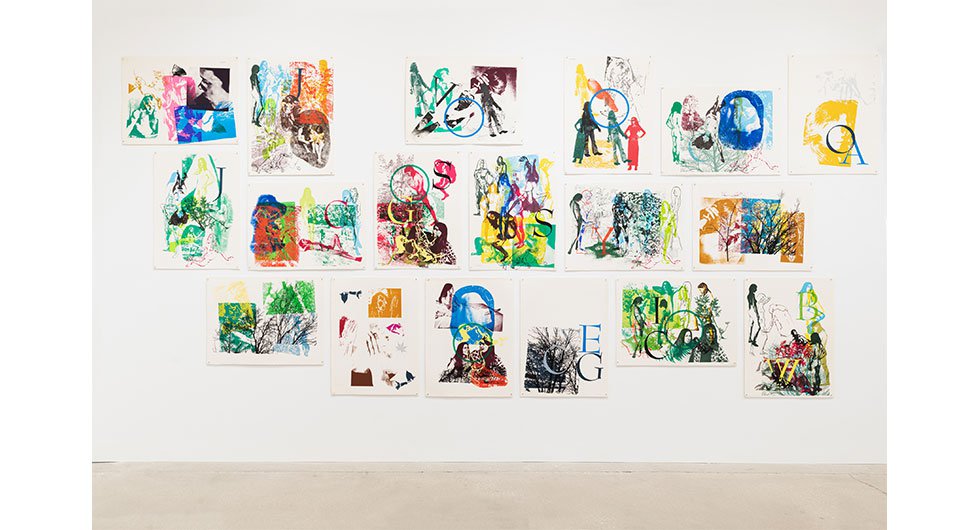 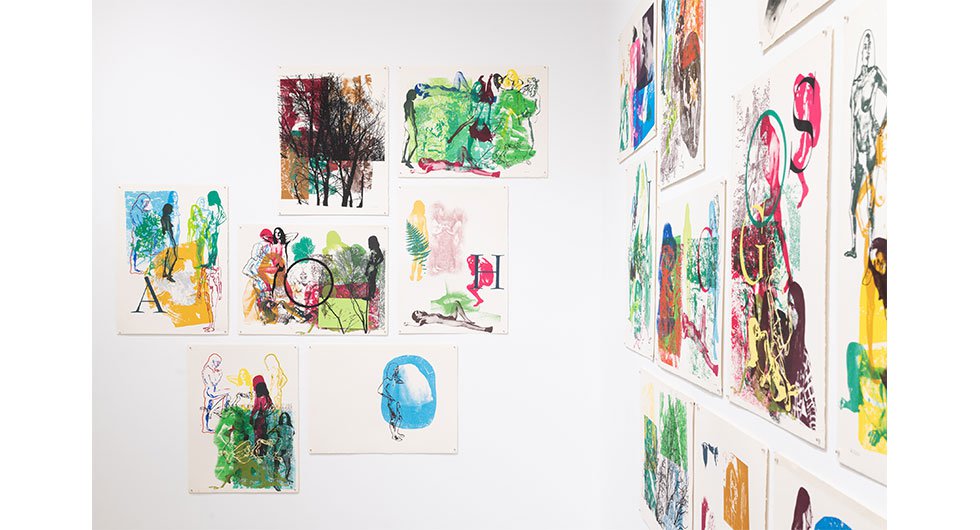 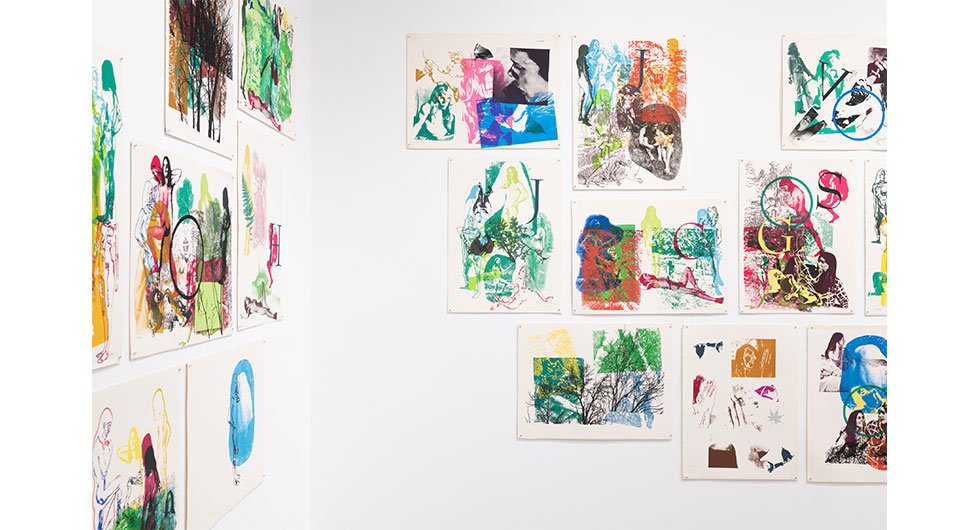 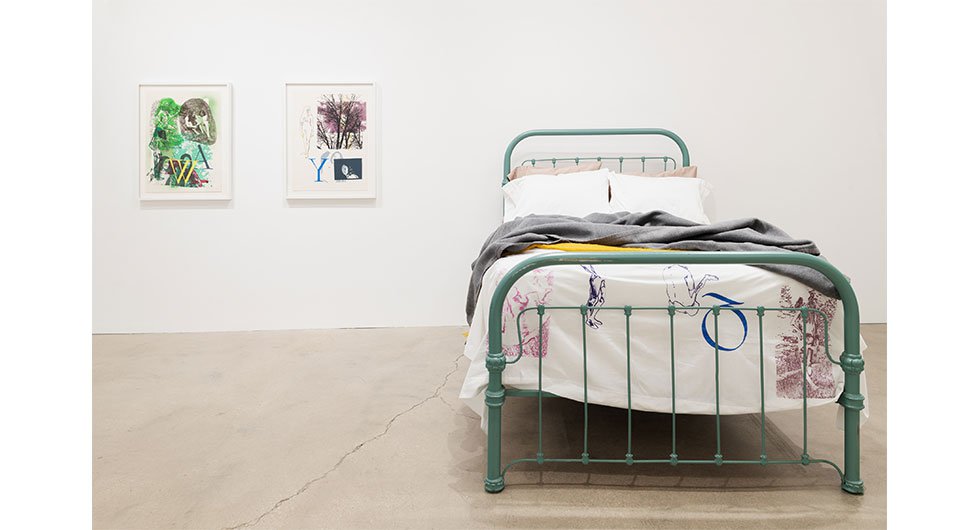 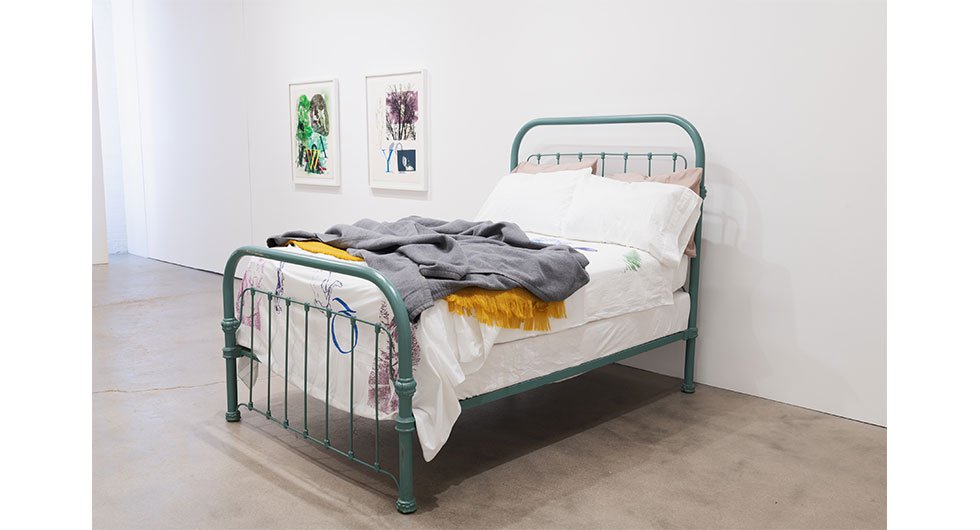 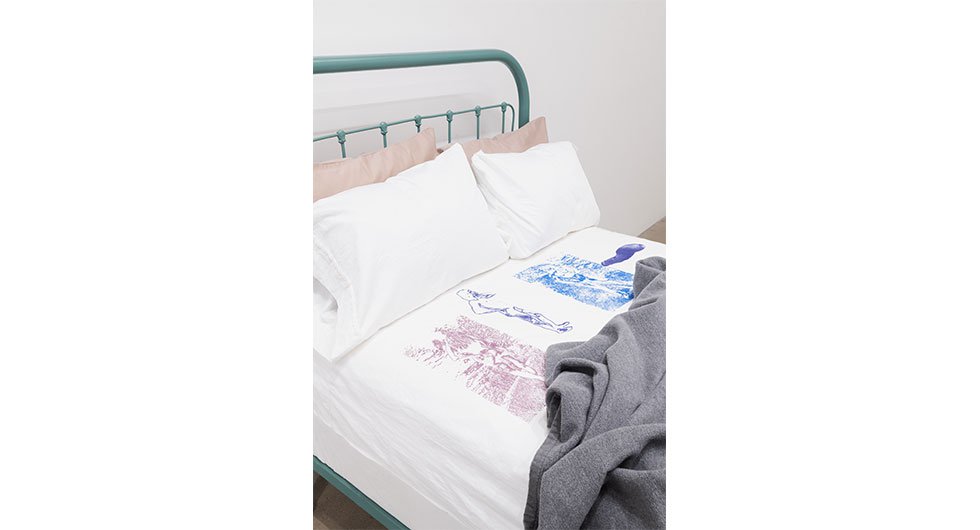 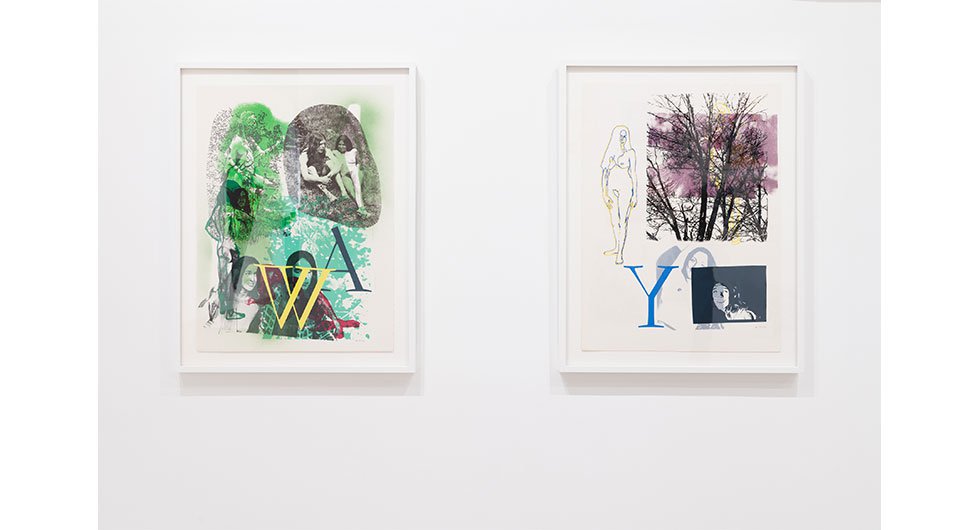 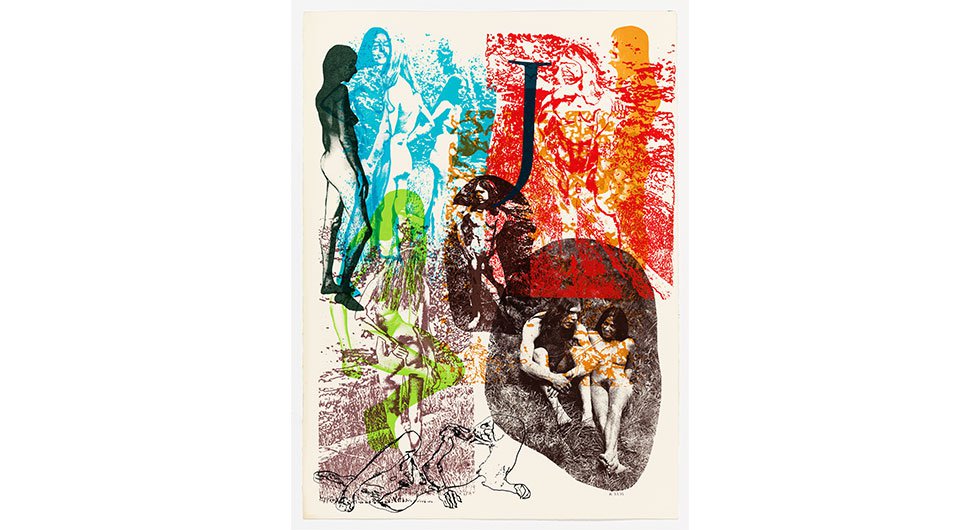 In its north gallery, Corbett vs. Dempsey is delighted to unveil Dick Higgins, 7.7.73, an exhibition of unique printworks made in the early 1970s. The gallery has represented the Higgins estate since 2014. This is the first presentation of his work at CvsD.

In 1973, Higgins began a monumental series of works, the majority of which were executed as unique prints on paper. Using chance procedures – a technique championed by his friends John Cage and Jackson Mac Low – Higgins placed images on pages of Arches paper. Vibrant silkscreened photographs of friends and foliage, all shot au naturel in verdant Vermont, they were part of a larger post-hippie moment in which he sought to explore a nature-bound version of Pop Art, what he called Arcadian Pop. The resulting printworks – more than 400 of them in total – range drastically in density and impact, from a few that, via chance, sported no images at all, to others in which frolicking bodies jostle for space in a bushy woodland. Taken as the massive project that it was, 7.7.73 is a beautiful representation of the potential to combine a systematic procedure for production and a rich emotional resonance, a refutation of the idea that these concepts are at odds. By turns funny, playful, sexy, joyous, reflective, arch, and subversive, the prints are very much rooted in their time. These aggregate images feel once again relevant, embracing a bucolic, fresh-air sociality, at the same time, through the use of repetitions of the same image, suggesting something deeply insightful about the representation of nature, the unnaturalness of mechanical reproduction, a sort of qualified utopian response to Rauschenberg’s cooler urban-oriented silkscreened works. This rare exhibition of these works includes more than 25 of the original prints, as well as a set of bedsheets onto which Higgins cheekily printed images.

A composer, writer, poet, publisher, and artist, Dick Higgins (1938-1998) was a major figure in the Fluxus movement, which he helped establish in the early 1960s. Perhaps best known for his work with Something Else Press, the publishing house he founded in 1963, Higgins edited and produced landmark books by figures including Cage, Merce Cunningham, Ray Johnson, and Gertrude Stein, as well as fellow-Fluxus participants Emmett Williams, Daniel Spoerri, Ben Patterson, Wolf Vostell, and George Brecht. Higgins famously coined the term “intermedia.” He wrote extensively as a theorist of experimental art, including important investigations of aleatory processes, and was a pioneering proponent of the use of computers in art making. Like many works by Fluxus artists, Higgins’ oeuvre included significant works that were only marginally documented or completely ephemeral. As a group of works, 7.7.73 was his most substantial output of art objects, and it remains one of his most ambitious undertakings, a herculean effort after which Higgins suffered a debilitating nervous breakdown.

In celebration of the exhibition, CvsD is publishing a 7.7.73 ‘zine featuring images of many of the works in the show and an essay by art historian and Fluxus scholar Hannah B Higgins, daughter of Dick Higgins and artist Alison Knowles. In the gallery’s Vault, as a metropolitan counterpoint to the pastoral prints, we are screening The Flaming City, a rarely seen 1963 film by Higgins shot on the streets of the Lower East Side.

At David Salkin Creative, a concurrent exhibition titled Some Intermedia presents publications and ephemera related to Higgins’ work with Something Else Press. It runs from January 8 to February 26, 2022.