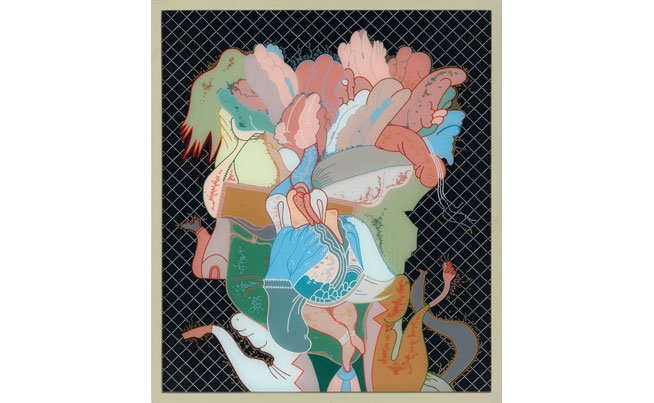 Barbara Rossi at the New Museum

Rossi first exhibited her work in late-1960s Chicago where she became associated with the Chicago Imagists, a group of young artists known for their shared interest in non-Western and popular imagery, their pursuit of vivid and distorted figurative work, and their fondness for comic gags or puns. Rossi’s disorienting compositions, however, remain idiosyncratic even among an eclectic set of peers.

Beginning with the graphite drawings presented in the exhibition, Rossi turned inward to find a visual language independent of contemporary tendencies and art historical traditions. By the rules of a self-devised method, she started each work without any compositional plan and adopted an open and introspective process that allowed her “magic drawings” to emerge, unconsciously, through one form at a time. In these works, sporadic figurative suggestions countered Rossi’s drifting morphology and eventually transformed her wandering lines into mischievous, psychedelic portraits.

The baroque characters that populate Rossi’s reverse Plexiglas paintings appear as bodies depicted from the inside out, churning with knobs and bulges that suggest folds of skin or mounds of flesh. Their dynamic contours seem to elaborate the forms of Rossi’s improvised “magic drawings” but developed from her printmaking studies and many preparatory compositions, which she calls her “sweat drawings.” In her reverse paintings on Plexiglas, Rossi applied precise lines and uniform fields of color to the back of the panel in a technique that does not admit revision or overpainting. Channeling her dedication to craft and precision, she embellished the surfaces of these works with beaded constellations of paint whose pointillist shadows are cast through the Plexiglas to underscore the reverse painting method. Sparkling with texture, some of Rossi’s forms twist into kaleidoscopic silhouettes and contort with prolonged viewing, while others introduce more stable, angular figures that highlight her graphic sensibility. In contrast to the cartoonlike antics of these works, however, Rossi’s fastidious approaches to composition and technique emerged from her practice of intense visual observation, her interest in vernacular devotional images, and her appreciation of art as a conduit of complex mental states.

“Barbara Rossi: Poor Traits” marks Rossi’s first museum exhibition in New York as well as the most significant presentation of her work since the early 1990s. The exhibition is curated by Natalie Bell, Assistant Curator.