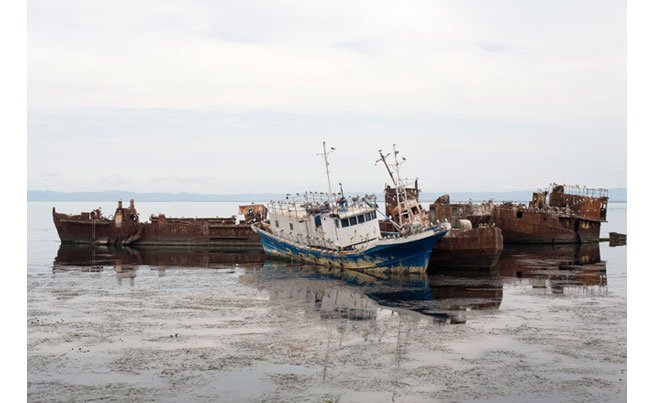 David Hartt, Interval, at the Bonaventure Hotel with LAXART

LOS ANGELES – Situated in a street level suite of the Bonaventure Hotel, Interval contains a two-channel film work on LCD monitors, including original music by Mitchell Akiyama accompanied by seven photographs laminated as decals on the storefront of the space. A final element on the checklist is the building itself, which the artist sought out and made clear was the preferred installation site.

Situated in a street level suite of the Bonaventure Hotel, Interval contains a two-channel film work on LCD monitors, including original music by Mitchell Akiyama accompanied by seven photographs laminated as decals on the storefront of the space. A final element on the checklist is the building itself, which the artist sought out and made clear was the preferred installation site.

In Interval, Hartt unites otherwise unapproachable locations to make very remote places a singular geography. The northern Canadian town of Whitehorse and the island of Sakhalin (apart of the Japanese archipelago but belonging to Russia) are the settings for his two-channel film work. Bridging Siberia and the subarctic, with the Bonaventure as a portal, Interval takes root in peripheral locations to present a meditation upon vanishing distinctions that formerly separated the center from the periphery. This includes nations from their own internal frontiers and countries from one another.

If our era has been called the end of history, it is so through interconnectedness. Interval positions Sakhalin and Whitehorse as terminal stops along a trail of interconnected communities that make a global picture. Sakhalin and Whitehorse can serve as the image of sameness or as the rupture—places in the system where life becomes atomized and micro-national and yet still bears a resemblance to the market, anywhere. Interval traces the intersection of competing forces, where the strategies of dominant cultures meet the tactics of local inhabitants.

Interval sympathizes with what others might call wasteland conditions — where people live on the margins of borderlands. This is the artist’s means to comment on the center. It proceeds in the footsteps of Russia’s Anton Chekhov (1860-1904) and Canada’s Glenn Gould (1932-1982). Chekhov wrote on Sakhalin Island in 1891. His goal was to complete an expository census on the inhumane conditions of Siberian prison camps. As Chekhov’s only work of nonfiction, it is now considered a masterpiece of investigative journalism. Conversely, an artist known best as a pianist, Gould made “The Idea of North” as an experimental radio-play for the CBC in 1967. This tapestry of testimonies recasts isolated workers as explorers in their own right. Travelers, whether laborers or academics, paint a picture of the arctic in real yet poetic terms of those who have endured extended periods away from the center and are wiser for it. Both Chekhov and Gould followed western civilization to its periphery and found there an end to its reason.

Likewise, Interval has an ethnographic character. In his own words, Hartt chooses “subjects and sites [as] reflective of an attempt to represent a full spectrum of ideological potentials.” However faceless or nameless the present authors of globalization may be, as compared to Chekhov and Gould’s time, the images in Interval capture imperial divinations that ensure a Sakhalin or a Whitehorse not an expression of insularity or arctic propinquity alone. They are scenes invested in the ends of empire.

About the Artist
Born in Montréal in 1967, he lives and works in Chicago. He has an MFA from the School of the Art Institute of Chicago and a BFA from the Department of Visual Arts at the University of Ottawa. Hartt’s work is in several public collections including The Art Institute of Chicago,Museum of Contemporary Art, Chicago, The Museum of Contemporary Photography, Chicago, The Studio Museum in Harlem, New York, Whitney Museum of American Art, New York, Henry Art Gallery, Seattle, The National Gallery of Canada and The Stedelijk Museum, Amsterdam. David is the recipient of a 2015 Foundation for Contemporary Art Grant, in 2012 he was named a United States Artists Cruz Fellow and in 2011 he received a Louis Comfort Tiffany Foundation Award. He is represented by Corbett vs. Dempsey, Chicago and David Nolan Gallery in New York City and Faculty at the Milton Avery Graduate School of the Arts, Bard College, New York.

David Hartt Interval is an LA><ART commission for the Occasional and is made possible by generous grants from the Graham Foundation, the Andy Warhol Foundation for the Visual Arts and the National Endowment for the Arts. Interval includes support from David Nolan Gallery, New York, Corbett vs. Dempsey, Chicago, and the Art Institute of Chicago, where the work will be exhibited  June 6– October 11, 2015.This site-specific installation would not have been possible without the generous partnership of the Westin Bonaventure and Director of Finance Gary Wolf.

The Occasional focuses on international artists residencies as well as the staging of new works in experimental sites throughout the city. The Occasional will be free of the two-year time constraints of a biennial and thus allow artists and curators the time to realize a project according to the artist’s vision. The Occasional is centered around criticality and innovation in the process of collaboration between artists and curators. Our curatorial team includes Sylvia Chivaratanond of the Centre Pompidou, Matthew Schum of LA><ART, and Lauri Firstenberg, founder and director of LA><ART. Commencing with travel and research in 2013, LA><ART staged think tank sessions amongst the curatorial team which began at the Getty after the success of the Pacific Standard Time Performance and Public Art Festival. This series of new commissions takes a city in flux as its starting point, examining Los Angeles through the work of artists that can test L.A.’s capacity for experimentation in a broader setting outside of the traditional institution.