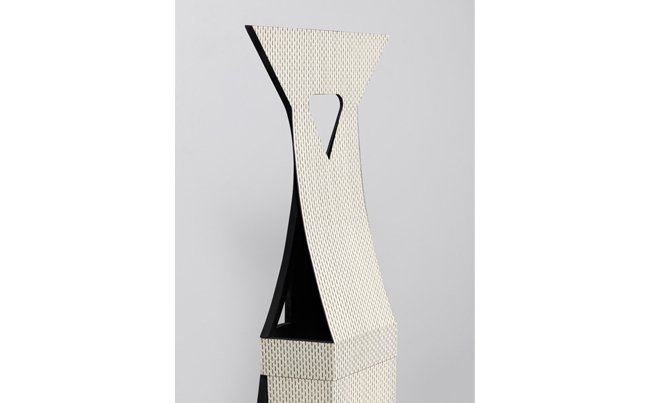 LONDON – They say that the first walls were made of textiles, or animal skins. Buildings developed as a support from which these coverings could be suspended, to shelter early humans from the elements. English preserves the idea of wall/shawl architecture in the word ‘cladding’ (‘clad’: ‘clothed’, as in ‘scantily-’). Both clothes and rooms map bodies, though clothes cling to us more tightly; both can be armour, both can be cages.

Since the early 1980s, Diane Simpson has been performing a work of reverse engineering on garments, or parts of them, which she comes across either in photographs and paintings, or, more recently, through collecting the fabric items themselves. Transposing them, through a particular process of axonometric drawing that she has developed down the years, into a series of lines pencil lines on graph paper, she then re-creates these linear schemata in three dimensions. (Simpson’s earliest pieces were made of corrugated cardboard and then, for many years, primarily MDF. Since the mid-1990s, the artist has used any number of materials from aluminium to lino to polyester.)

Garments are often cut according to paper patterns but, rather than flattening objects into their constituent parts, Simpson’s drawings resemble architectural diagrams, covered with minute calculations of length and depth. If they have analogues in tailoring, these would be dart notation patterns with their hallucinatory, triple or quadruple edges, which indicate how volume might be contained within folds. Simpson’s sculptures, on the other hand, we read, paradoxically, as graphically flat: a cross between a cartoon illustration and a paper maquette.

And yet, unlike most paper maquettes, Simpson’s collars, pleats and aprons are uncannily scaled-up – recalling the enlargement and isolating crop of Domenico Gnoli’s painterly lingerings, in the mid-1960s, on top buttons, pockets, loose curls of hair against patterned dresses. In both cases, as in the paintings of Christina Ramberg, a friend of Simpson’s and a fellow graduate of the School of the Art Institute of Chicago, attention is paid to things that enclose or encircle: buttons for Gnoli; corsetry for Ramberg; capes, collars and peplums for Simpson. In each case, there is a lingering, electric-shock charge of desire, which has something to do with fetishes and fragmentation, and the urge to touch the parts of the body that the garments touch: the waist, the breast, the hollow between the collarbones. But whereas for Gnoli, the button can easily be opened, Ramberg and Simpson work with containment and constriction, particularly of the female form: both physically and, by extension, through a metonymic reduction of women to the clothes we wear.

Simpson’s garments are theatrical flourishes: clothing as costume, as a kind of disguise. Her sculptures are objects that act like diagrams, while Lesley Vance’s window-scale paintings are surfaces with – and in some ways about – the illusion of depth. A tangle of planes and almost-forms, some more sharply resolved than others, each canvas seems to fold in or twist back on itself, containing a tightly coiled world. While it may appear that Vance proceeds by collage – layering discrete shapes over one another in a Cubist trick of colliding realities, these are not the result of an additive painting process but are themselves an illusion; the entire composition exists in the same flat paint layer. As you begin to understand when you get up close and see where the brushstrokes loosen and fray, the paint pushes and pulls, almost of its own volition. (Vance has spoken about her process as a kind of automatic drawing.)

In places, the gesture of painting seems less about accretion than excavation, as though the brisk, feathered brushmarks were unmasking dormant flashes of wild colour (a seam of lilac, a lozenge of perfect lemon yellow). You’re never quite sure how deep these paintings go. They have a disorienting, oneiric plasticity; it’s hard to know which way is up, or down. The forms are seductively organic – recalling a furled bud, a fruit, a frond. It can feel like you are amid the dream-tinted foliage of a Henri Rousseau jungle, tenebrous but colour-drenched; take care not to lose the way out.

Looking at the work of Simpson and Vance, I am reminded of a famous photograph of Josef Albers, from the days of his Preliminary Course at the Bauhaus in Dessau, inspecting a field of folded paper sculptures. ‘Make something out of [the paper] that is more than you have now,’ Albers told his students. But not with scissors, knives or glue: learn to make a volume without compromising the integrity of the plane, something that operates as both, simultaneously. Geometry has a name for shape, such as a cones or cylinders, which can be formed from a flat sheet with no distortion, stretching or tension. It could equally well describe the works of Simpson and Vance: developable surfaces. By Amy Sherlock.