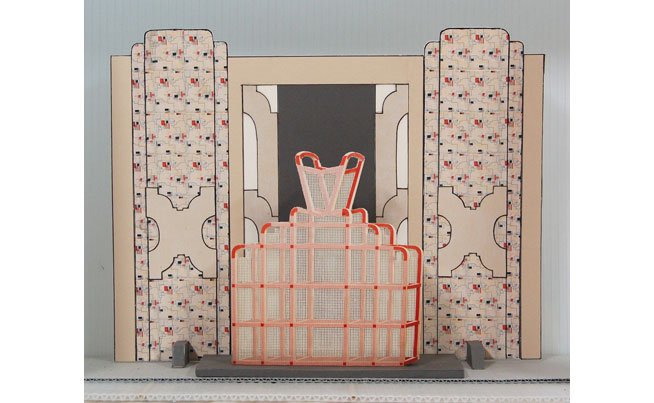 Longtime member of Chicago’s art community, Diane Simpson (American, b. 1935) makes distinctive sculpture that have gained recognition both nationally and internationally. Originating as a commission from the Racine Art Museum, Wisconsin, which occupies a former department store, Window Dressing was designed for the museum’s six street-level display windows. Four of these six tableaux make their Chicago premiere in this presentation. Each window display consists of an individual sculpture that evokes clothing and accessories set against a backdrop that incorporates the geometric patterns and streamlined curves of the Art Deco period. To seamlessly combine the sculptures with the backdrops, Simpson also crafted stands, platforms, hangers, and other display furniture. Simpson’s ambitious project pays homage to the pioneering window dressers of the early 20th century who developed the field of merchandise display.

Simpson’s manner of working has always been process-driven. She plays with abstraction, figuration, color, and form to create works that fuse material culture and fine art. Inspired by clothing from a wide variety of cultures and eras, Simpson carefully researches and renders these utilitarian items into two-dimensional drawings. She then realizes the final works—which in this presentation include a bowler hat and a woman’s pinafore—in three dimensions, often schematizing or exaggerating their original forms. Hand-constructing the sculptures from a wide range of materials, Simpson cuts, stitches, wraps, folds, ties, and rivets these items together to create the final pieces. To provide a glimpse into her working process, the exhibition also features research materials selected by the artist. They include trade manuals and journals of the 1920s and 1930s, as well as scale models for the some of the finished works.

The exhibition is organized by Lynne Warren, Curator at the Museum of Contemporary Art Chicago.