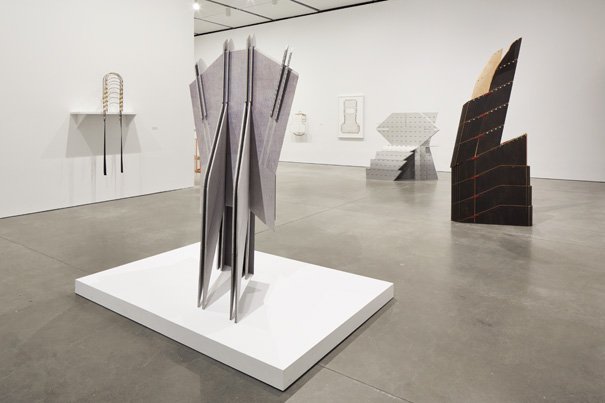 NEW YORK – Diane Simpson on her retrospective at the Institute of Contemporary Art Boston in Artforum.com

In the November 2015 issue of Artforum, Kate Nesin says of artist Diane Simpson: “[She] realizes the singularity of each sculpture through assiduous refinements of deformation, material selection, and construction. That is, each sculpture stands on its own, marked by her attentiveness.” And attentiveness is the word one would use to describe Simpson, a scrupulous maker of body-conscious forms that call to mind the intricate details of period costumes, Art Deco design, and various kinds of ceremonial and fetish objects. Simpson lives and works in Chicago and has had numerous exhibitions. Her first museum retrospective, curated by Dan Byers at the Institute of Contemporary Art, Boston, will include fifteen sculptures and twelve drawings made between 1980 and 2014. The exhibition opens December 16, 2015, and runs through March 27, 2016.

I GREW UP IN THE MIDWEST. Never really left it. Virtually all of my working life was spent in the Chicago area. Directly out of high school I majored in art for two years at the University of Illinois at Urbana-Champaign and then transferred to the School of the Art Institute of Chicago. I got married at that point and soon afterward was pregnant with my first child. I continued to attend classes until my ninth month but missed the last quarter for my BFA. Ten years later, in the late 1960s, when the youngest of my three children entered first grade, I returned to SAIC and completed that final quarter.

By the time I went to grad school in 1977, two children were in high school and one was entering college. I was in my forties. It was great. I had been so isolated from other artists and the art world in general, though I never stopped making art on my own. In grad school, also at SAIC, I was in the painting department, but I never actually painted. I was primarily making drawings of utilitarian objects on large sheets of graph paper. I developed my own spatial system using forty-five-degree angles to visualize three-dimensional forms. Toward the end of graduate career, I was encouraged to start building these forms. With these first sculptures, I was curious to see what would happen if I applied the same rules of perspective—the forty-five-degree angles I was using in my drawings—to actual space. For these early works I used Tri-Wall, a triple-layer corrugated cardboard. It was the perfect material for someone who had never had a sculpture class. The material was cheap and only required a jigsaw and knife-edge blade to cut. For several years I worked with only corrugated cardboard; later, I ventured out to MDF and other materials.

Being an artist in the Midwest versus, say, New York, has advantages and disadvantages. Midwestern artists seem more likely to develop their own individual and idiosyncratic ways, less influenced by current trends. The disadvantage is limited exposure and less critical press.

Throughout the years, I always had opportunities to exhibit my work in Chicago and throughout the Midwest. This exposure was all the motivation I needed to continue developing as an artist. Now I am amazed by all the attention my work is suddenly receiving beyond the Midwest. It’s really strange and I don’t quite understand it. I’m honored and thrilled, but, you know, I’ve been working for a long time. Making art is what is most important to me. All the rest is a bonus. The most gratifying part of all this is that young people seem to be relating to my work. Maybe it’s the craft that appeals to them? There is a lot of sculptural work that is not carefully made, and maybe seeing the care I put into details and my materials speaks to them.

Image above: Installation view of Diane Simpson: Sculpture + Drawing 1978-2009, at the Chicago Cultural Center in 2010.