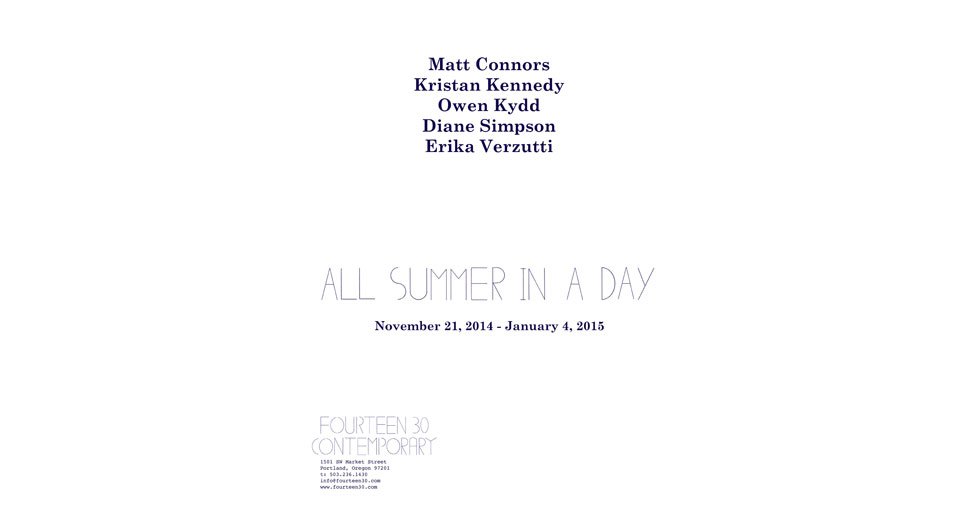 Diane Simpson in All Summer In a Day

PORTLAND – Fourteen30 contemporary is pleased to present a group exhibition All Summer In A Day, with work by Matt Connors, Kristan Kennedy, Owen Kydd, Diane Simpson, and Erika Verzutti. An opening reception will be held on Friday, November 21, and the exhibition will run through January 4, 2015.

With its title borrowed from the 1954 short story by Ray Bradbury, in which a group of school children who live on Venus linger in a world of constant rainstorm where the sun appears only once every seven years for a brief moment. The exhibition responds in part, to the Northwest winter. While acting to disrupt and invert the monotonous, prolonged event that is the seasonal climate, the exhibition simultaneously highlights the contradictions of event and non-event inherent in the notion of change, both seasonal and aesthetic. In its presentation of works that embody different notions of form, weight, light and color, All Summer In A Day presents contradictions of parts composing the whole, be that climate, medium or genre.

Matt Connors’ vibrant acrylic on canvas pieces feed upon the aesthetic history of abstract modernism, while embracing a quality of momentary natural and artistic intervention into traditional forms in his incorporation of rubbings and dripping paint. The distressed linen canvasses of Kristan Kennedy represent the final stage of an extensive process of artistic labor. Opposing the often perceived ‘precious’ nature of paintings on linen, her works are unbridled in their expression; handled and washed with vigor – marks literally erased by the washing machine and replaced by new marks in ink, dye and detritus.

Erika Verzutti’s early works consist of recognizable vegetable shapes and tools of artistic production,  bringing  forward  questions  of the intentionality  of form and purpose.  The simple shifts of context, mode and form of Verzutti’s works creates alien contexts in which the past uses of the constituent pieces are not experienced so much as recalled through a haze of artistic repurposing. Similarly, Diane Simpson’s sculptures use materials such as aluminum and leather in a formalist style that recalls objects, such as dress forms, whose functionality  is contained  within their aesthetic  shape. Simpson’s  central work in the exhibition articulates the timelessness of solid forms; the architecture measures at human proportions,  and the manufactured  quality of the work provides  a sense of exoskeletal proportions from that which threatens to erode.

Finally, video works by Owen Kydd extend the temporality  of the exhibition  towards an ambient existence, eschewing narrative structure in favor of ‘uneventful’ images of static forms. His minimalist videos display ambient motions of the everyday; as they disperse the burden of viewership and attention these works appear to breathe and exist alongside the viewer rather than in front of them.

As a whole, All Summer In A Day presents an intervention into the status quo that draws from the familiar and disparate, creating a world formed on the edge between a pool of sunshine and the shadow of a raincloud.

The gallery is open weekends 11 to 5 and by appointment.