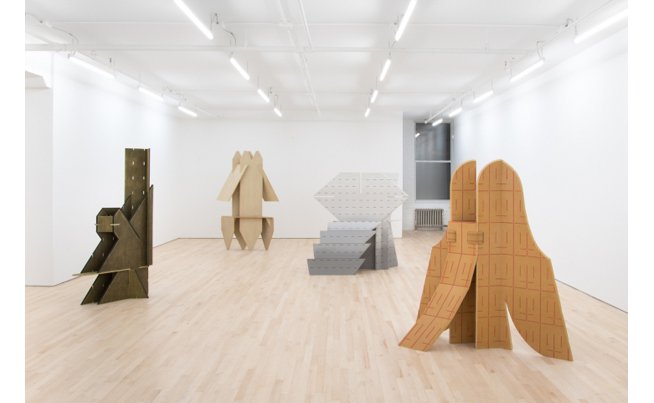 CHICAGO – Diane Simpson’s sculptures, which are made from planes she cuts and scores when she wants to curve them, always begin with a drawing.

Working within severe constraints can be liberating. This is the case with sculptor Diane Simpson, a late bloomer, who had her first exhibition in 1979, shortly after getting her MFA at The School of the Art Institute of Chicago, where she received her BFA in 1971. At the time, she was in her mid-forties. She had never studied sculpture in school, as she told the curator Dan Byers in an interview published in the catalogue for her first solo museum exhibition, held at The Institute of Contemporary Art/Boston(December 16, 2015 – March 27, 2016):

I started at zero, with no 3D skills. So, with each new material the process involved much trial-and-error and lots of do-overs — and still does. But sometimes this limitation in techniques can be an advantage, leading to an original and good solution.

This is what Diane Simpson wrote in an email to the curator Dan Byers, which he included in the interview:

Simpson’s sculptures, which are made from planes she cuts and scores when she wants to curve them, always begin with a drawing. The sculpture is her translation of the drawing into a three-dimensional object. The current exhibition, Diane Simpson “Samurai,” which is the first in the new space of JTT (November 13, 2016 – January 15, 2017), is devoted to a series done in the early 1980s, when she began making work inspired by the suits of armor worn by samurai in feudal Japan. It is clear from this exhibition that she had developed her own breakthrough idiom, which was not like anything else being done at the time.

The more I walked around the exhibition the stranger it got, which is usually not the case. For one thing, the large set of parallel planes, with other, smaller planes at right angles or, in some cases, forty-five degrees angles, are close enough together that the work seems to be sitting between a flat two-dimensional world and schematic three-dimensional word, the result of having originally been tightly drawn on a sheet of graph paper.

The rigidity of the planes evokes medieval Japan with its strict ranking and class divisions, particularly when it came to its civil servants, who were divided into twelve classes, which were further divided into two sub-ranks. While samurais, as played by world class actors Toshirô Mifune and Tatsuya Nakadai, are the heroes of movies by such great directors as Akira Kurosawa, Hiroshi Inagaki, and Masaki Kobayashi, they were rather low in the social pecking order. I don’t know how much other viewers would be reminded of samurai flicks, but they certainly among the first associations I made. Consequently, I wasn’t surprised to learn that Kurosawa’s lavish feudal epic Kagemusha (1980) starring Nakadai was one of the artist’s inspirations. Beyond samurai, I think it is also likely to be reminded of architectural models, origami, and clothes made for paper dolls, as well as the sections of dress patterns.

Clearly, the samurai outfit afforded little comfort to the wearer. Rather, looking at these stiff planes and curves, one feels that the warrior’s movements would be severely circumscribed, that the need for protection limited what actions he could take. The sculptures are made out of wood or MDF (medium density fiberboard), which is sturdier than plywood but can be scored and bent like foam core. Many of the edges are beveled, echoing the forty-five degree angle at which many of them are set. Moreover, the beveled edges, particularly those bordering the surfaces angled away from the dominant planes, suggest movement — something not quite still or sedentary in the world.

Simpson fits the planes together through simple utilitarian means – notches, slits, and canvas straps. The basic means by which the works rise up from the floor, balanced like a sturdy set of cards, is part of their meaning. All of the carefully cut and scored planes have a pattern of grooves or slits spanning them, so that no surface is untouched. The grooves are either horizontal or vertical, occasionally in combination. They come across as seams, places where the surface could fold, as they might elsewhere in a work.

In addition, Simpson often goes over the surface with oil stain, paint, or, in one work, red pencil, which she uses to fill in each groove on one side of the plane. There are lots of shades of tan in this group of works. In “Samurai 6” (1982), Simpson uses enamel paint, which she slowly lightens from gray to white as it moves up a series of stacked planes and perforated planes. At one point, I could not tell whether the progressively lighter shades of the planes were due to the ambient light or because they were painted that way — a delicious ambiguity that made me look closer. Simpson’s attention to surface and her use of pattern struck a chord: how much of the samurai’s armor was decorative and how much of it was necessary? By erasing the distinction between the two, she underscores that decorative beauty can arise out of necessity and the utilitarian, that it need not be extraneous or, as I began to think, a sign of vanity.

A few months ago, while briefly in Chicago, I was able to see and review a show of Simpson’s recent series Peplum, which she did between 2014 and 2016, at Corbett vs. Dempsey. The works in “Samurai” done near the start of her career, and those in Peplum reveal that she was very good and original at the start, and that she has gotten better and better over the years, while remaining true to her do-it-yourself practice and her intuition that the decorative and the functional need not be separate. It is an aesthetic that has more to do with the functional simplicity of the Shakers than with Minimalism or any other modernist essentialism. In working this way, with these plain materials, Simpson offers a stirring rebuke to the excess we find so pervasive in the art world, not to mention the financial world that supports it. She has merged ethics and aesthetics to arrive at an art that is brimming with the political, as are the “black” paintings of Ad Rinehardt.