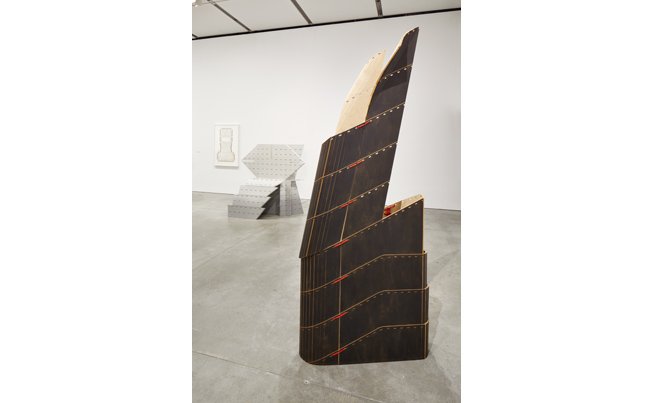 BOSTON – Diane Simpson exhibition at the ICA reviewed in the Boston Globe by Sebastian Smee.

Diane Simpson sets usually separate parts of the brain cogwheeling together in mental motions as surprising and satisfying as choreography. Simpson, who is 80 and lives in Chicago, is the subject of a small but riveting exhibition at the Institute of Contemporary Art

To make her sculptures, Simpson transposes details of clothing or architecture that have caught her fancy — they may be Japanese kimonos, aprons, tunics, or bibs — into structural diagrams, which she then reimagines in three dimensions.

The results are superb, combining as they do aspects of Cubist sculpture (I thought in particular of Picasso’s Ballets Russes “Parade” costumes) with a lean, origami-like emphasis on structure, and a deeply original focus on materials, textures, and colors.

One part of your brain is seduced by these colors and textures. All have different associations, both social and personal, architectural and domestic. “Muff,” for instance, a piece which is mounted on the wall, is made from faux-fur, fleece, and mahogany. It’s intensely sensual.

Nearby, the more severe and freestanding “Apron III” is made from MDF, basswood, linoleum, and enamel. And then there’s “Vee,” which has been placed on a pine shelf attached to the wall: It’s scrupulously constructed from steel, birch, enamel, and wool.

But as you take in each piece’s materials, another part of your brain is caught up in a set of convoluted pictorial puzzles, hinging on the interplay between diagrams and real objects, between three dimensions and two.

Simpson attended the School of the Art Institute of Chicago in the late 1950s. Not long before graduating, she had the first of three children, so it was 10 years before she returned to the school, stretching out to four years the one remaining quarter of work she required to graduate.

It’s tempting to play up connections, in style and idiom, between Simpson and the Chicago Imagists — artists such as Christina Ramberg (who showed at the ICA in 2013-14), Barbara Rossi, Miyoko Ito, and Jim Nutt, all of them interested in representational codes common to pop culture, fashion, and graphics.

Those artists also attended the School of the Art Institute of Chicago and showed at Phyllis Kind Gallery, where Simpson later showed. But Simpson insists she was not part of their circle in the 1960s (“I was living in my domestic world, doing a lot of diapering”) and later had only glancing relations with them.

During the 1960s, and later during grad school, Simpson made drawings and collagraph prints of boxy, architectural forms. A grad school adviser suggested she try to build these forms as actual objects — and she was on her way.

“I started at zero, with no 3-D skills,” she told the curator, Dan Byers, in an interview published in a small catalog accompanying the show. But a limitation in technique, she noted, “can be an advantage, leading to an original and good solution.”

By way of example, Simpson cites “Amish Bonnet,” a 1992 work made from a 3-D grid of brass tubes that form the shape of a bonnet or an architectural arch.

At first, said Simpson, she thought she needed to weld the tubes together. But that would have involved taking a welding class. So instead, she crimped the tubes flat at each joint and tied them together with waxed cords in different colors — brown, yellow, and black. The resulting pattern is integral to the work’s overall effect.

In “Amish Bonnet” and many other works, Simpson uses methods of oblique projection — optical illusions that make two-dimensional images appear as three-dimensional objects seen from a 45-degree angle — to translate her drawings back into actual, sculptural objects.

In doing so, she lays bare the artificiality of primitive rules of perspective, as we routinely encounter them in pictures and diagrams. But more to the point, she creates mind-bending new structures that, from certain angles and distances, appear to resolve back into two dimensions.

Nor does it stop there. Simpson often applies two-dimensional patterns or lines to the surfaces of her sculptures, further enhancing their ambivalence. Picasso did similar things to the flat surfaces of his sculptures, but in a more freewheeling and whimsical way.

Simpson’s work has a stricter, more schematic quality. Her patterns don’t seem overlaid or ornamental; rather, they deepen the sense of each object obeying fundamental structural rules.

Simpson’s works are too mysterious, too self-sufficient, and too multivalent to be reduced to an interpretation. But when you are not simply thrilling to their intensity and oddity, you feel Simpson performing a kind of excavation of social and sexual structures usually kept invisible.

What emerges from this systematic digging is nothing “essential.” Rather, styles, codes, and fashions appear in her work as a kind of palimpsest of arbitrary conventions that, like sediment, have slowly become structural. They are also — in impressively austere, almost imperious ways — beautiful.

Because so many of Simpson’s sculptures are inspired by clothes, you are constantly thinking about them in terms of bodies — and usually female bodies. They make soft things hard, protruding things flat, curves straight, old and worn things new and immaculate.

You could say that a new, almost masculine severity is achieved, but I think Simpson’s works leapfrog binaries not only of medium (drawing or sculpture) but also of gender to arrive at something more interesting.

Many artists today are fascinated by the interplay between different media. Rosa Barba at MIT’s List Visual Arts Center uses celluloid film to make kinetic sculptures. Artists such as Ruth Asawa, John Cage, and Robert Rauschenberg in the Black Mountain College exhibit at the ICA combine weaving with sculpture, or sculpture with painting, or music with drawing, and so on.

Yet another artist, Lawrence Weiner, the man behind the latest Dewey Square Mural on the Rose F. Kennedy Greenway (the work was commissioned by the List) addresses the business head-on, his red text on a blue field reading: “A TRANSLATION FROM ONE LANGUAGE TO ANOTHER.”

All these artists make us conscious not only of the end product of any effort at translation, but of the rules governing acts of translation — the methodology. Whether we are talking computer code and digitization, musical transposition, scientific description, or indeed writing about art, translation is at the very center of modern life. It lubricates — and thwarts — everything, from our love lives and our dreams to our transport systems and political institutions.

Both the beauty and the thwarting parts are there, in equal measure, in Diane Simpson’s stunning work.