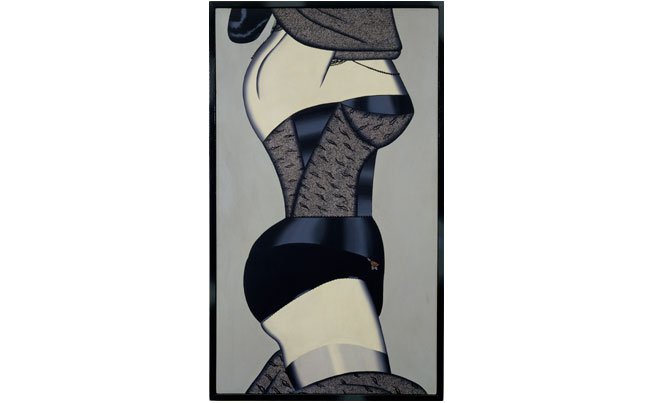 A painter associated with the Chicago Imagists of the 1960s, Ramberg enjoyed modest success in her lifetime, but has been largely overlooked since her untimely death at age 49. Ramberg’s subject was the body, in particular the female form, construed as a collection of parts—hands, hair, torso, and stand-in objects—and rendered with a discerning sense of line, shape, mass, color, and pattern. During the 10-year period on which this exhibition focuses—from 1971 to 1981—Ramberg’s radical, enigmatic, and accomplished paintings moved towards increasing abstraction of the human figure. The ICA exhibition revisits the artist’s work with new scholarship, examining Ramberg’s engagement with gender politics and her approach to the merging of abstraction and figuration. On view from Nov. 13 through March 2, Christina Ramberg is organized by Jenelle Porter, Mannion Family Senior Curator.

In the mid-1970s, as Ramberg’s figures became less sexualized and more grotesque, she achieved levels of formal coherence that demonstrate an increasing artistic maturity. In highly inventive works of 1980–81, she explored texture and composition through the rendering of clothing applied to dislocated forms. Entirely gone are the corseted ladies, cyborg armatures, and lace-clad volumes, and in their place are forms that assume the shape of a body, though not the flesh. Engaging her fascination with transformation, as reflected in the title Freeze and Melt, Ramberg recognized that some material—whether a liquid or the female body—is intrinsically mutable.

Christina Ramberg is accompanied by an exhibition catalogue published by the ICA . It includes an essay by Jenelle Porter, Mannion Family Senior Curator.

More information can be found on the ICA Boston website here.