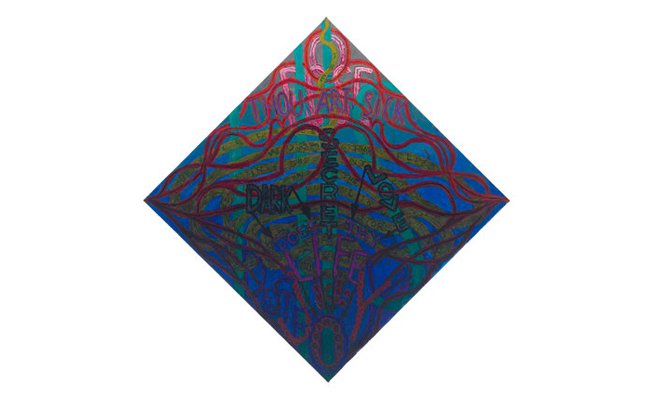 In funky, hallucinatory paintings by the Chicago artist Philip Hanson, at James Cohan, lines by Shakespeare, William Blake and Emily Dickinson appear as if seen in the fever dreams of a dying literature professor. Mr. Hanson came of age in the 1960s in the company of Jim Nutt, Roger Brown and other Chicago Imagists, and he was included in the 2014 Whitney Biennial. With his new works, he is creating soul-stirring synergies of the visual and the verbal.

Painting with viscous oils on rectangular and diamond-shaped canvases, Mr. Hanson constructs florid, heraldic compositions traversed by grids, serpentine lines and curved and flat bands. They appear to be lit from behind, like stained-glass windows.

Within the works arise phrases like “What fortitude the Soul contains,” from Dickinson, and “O Rose thou art sick,” by Blake. (The show’s title, “It Is Too Difficult a Grace,” also borrows from Dickinson.) Positioned against luminous and darkly shadowed backgrounds, each phrase is spelled out more or less legibly in vividly colored letters of different sizes on scrolling ribbons, embedded in flurries of abstract gestures and in other forms. Because most of the paintings are symmetrically composed, they resemble Indian mandalas designed to encourage centered meditation on eternal objects and ideas.

Mr. Hanson’s style also has a trippy goofiness to it, a cartoonish intensity that recalls psychedelic comics and posters of the 1960s. These are pictures of a transcendentally intoxicated mind.

You can read the full review here