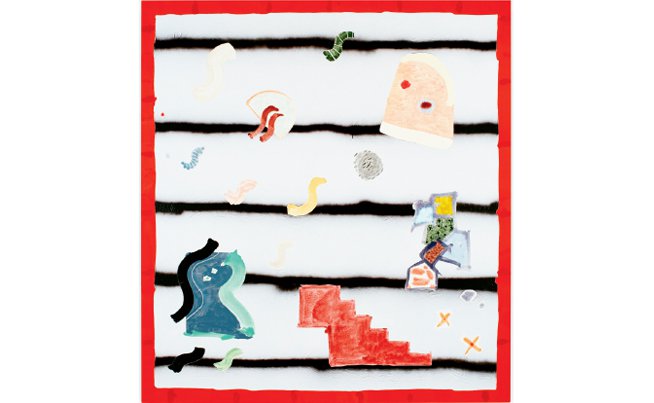 Rebecca Morris at 356 Mission reviewed in Art in America

In their visual convolutions, the compelling canvases in Rebecca Morris’s exhibition “Rose Cut” allude to the title, which she adopted from the rose-like, multifaceted style of diamond that appears in her engagement ring. The show smacked of a campy bygone era, perhaps the mistyeyed, mawkish 1980s, with its Cosby sweaters and scent of Love’s Baby Soft. The gallery’s expansive building, in its former lives, has been a printing press, a storage facility for baby grand pianos and an artist’s studio. Hung across two long opposing walls, the artist’s nine new massive abstract canvases succeeded in the daunting feat of holding the space. In 2006, Morris published a manifesto of sorts in an Artforum advertisement for her show at Galerie Barbara Weiss in Berlin. A list of 21 concise statements, at times sanguine and earnest (“Don’t pretend you don’t work hard,” “You are the master of your own universe”) and at other times sarcastic (“Whip out the masterpieces”), ended with an affirmative proclamation: “ABSTRACTION FOREVER!” The ideas she outlined there are still relevant to her work. Morris’s paintings stem from a playful streamof-consciousness approach yet are also grounded in a strict formalism (“Strive for deeper structure”). Grids and borders prevail. There is method to the madness of her color. Taboo combinations—pink and red, neon and pastel—are often found in her works (“Black and Brown: that shit is the future”). The canvases in this show teeter between formal opposites—evoking, by turns, the precise abstraction of Agnes Martin and the sloppy, spray-painted depictions of contemporary trappings by Katherine Bernhardt, the modernist tapestries of Alexander Calder and Fernand Léger and domestic yarn-art hangings (“Never stop looking at macramé”). Untitled (#04-15) would fit right in amid the Miami decor of “The Golden Girls.” Its chaotic layering of wavy triangles (“Triangles are your friend”), dots and grids painted in no less than a dozen colors, many of which clash, is contained by a flecked salmon pink border. Untitled (#01-15) intensifies such patterns and colors by hemming them into a large circle on a black ground. Other works are more open and have a less finished quality. The meandering S-curve brushstrokes in Untitled (#11-15)—one vaguely resembling a caterpillar, another a piece of bacon—appear holographic or sculptural against the striped, spray-painted background, the effect recalling that of Roy Lichtenstein’s works portraying enlarged brushstrokes on fields of benday dots. Untitled (#05-15), with its splotches, daubs and droplets of paint, could be mistaken for a drop cloth were it not for the thin gold grid (“When in doubt—spray paint it gold”) carefully hand-painted around the perimeter of the canvas. At times, it seems as if Morris grabs any and all colors within her reach. Some works are so wildly discordant, in hue and form, that they are akin to nails on a chalkboard. The ability to elicit such a strong reaction from the viewer, however, is something to celebrate. And, in fact, after being given a visual break by way of the mellower Untitled (#03-15), which features a white rectangle divided into patterned stripes in subdued hues, one yearned for the blitz.