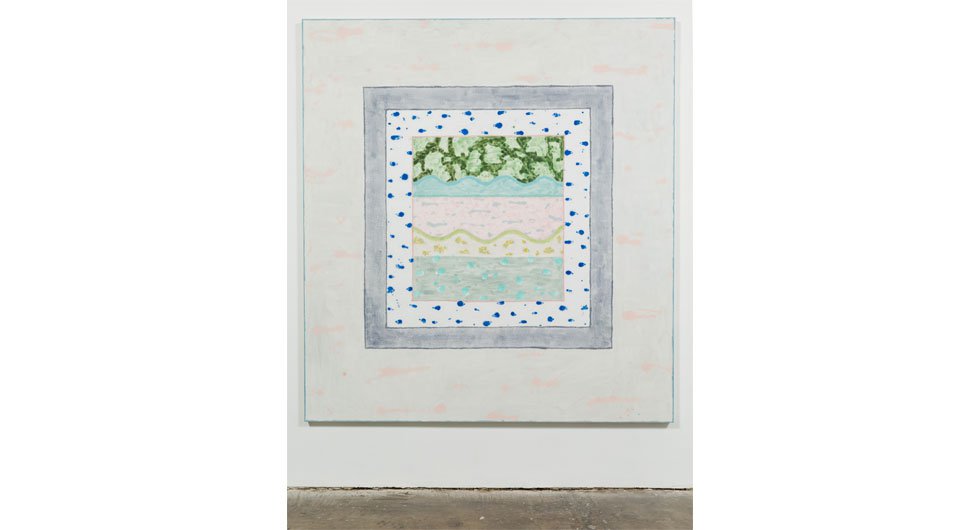 Rebecca Morris occasionally listens to songs on repeat in her studio as she paints. Fantastic L.A. takes its title from a rock and roll song by The Doors. In tandem, the LA-based painter and the quintessential LA band from the late 1960s provide an intriguing comparison between the craftwork of songwriting and the rigors of painting. These abstract canvases function as compositions recorded in layers to produce a unified whole. Like Peace Frog, the song lending its lyric here, the paintings begin with a minimal motif around the edges of the work. As a signature repeated throughout, getting denser towards the middle of the arrangement, a succession of marks applied to the canvas weave together like chord arpeggios meeting in a crescendo. Away from the center the structure loosens as the components inside the dispersed shapes containing the patterns and flourishes become subdued, the colors muted.

Additionally, the issue of awareness can be added to this comparison of forms. Few mediums have been as ever-present, influential or as derivative as these two have proven to be in their respective fields; allowing the onlooker to infuse prejudices into reception instantly when confronted with the latest posturing of either painting or popular music. Here, though, resides the magic of song when it is good and the allure of a canvas that avoids the inevitable pretenses hardwired into the void by history.

Yet, with Morris, we find ourselves just outside the oppressive realm of competence that has dogged American abstraction since the 1950s. These patterns built out of geometric distillations express structure in assembled scores that at first sight appear both familiar and original. The enveloping yet combative action that made abstract painting analogous to a recorded dance or performance in midcentury art has in Morris taken on the measured step of a conductor enclosing formal units in rhythmic impressions. Morris makes art while neither relying on nor avoiding quotation. She leaves no question that the harmony seen here comes not from without but within the composition. The exhibition comprises of orderly clusters that assert a redundant progression between each even stroke.

Pausing to examine the works in Fantastic L.A. for a moment—even for no longer than the duration of a classic rock tune—reveals an artist conversant with line and color, employed like signatures and verses in escalating bars that seem musical only because each section represents choices that are both inventive and automatic.

This exhibition is accompanied by a billboard on La Cienega Boulevard depicting Morris’ cats (on La Cienega, between Venice and Washington Boulevards).

LA><ART would like to extend a special thanks to Malik Gaines.

Painter Rebecca Morris lives and works in Los Angeles and is featured in the current Whitney Museum Biennial. She is the author of Manifesto: For Abstractionists and Friends of the Non-Objective (2004). She received her BA from Smith College (Northampton, MA), her MFA from The School of the Art Institute of Chicago and attended Skowhegan School of Painting and Sculpture in Maine. Morris has been the recipient of a Guggenheim Fellowship and awards from The California Community Foundation, The City of Los Angeles, The Tiffany Foundation, The Durfee Foundation, Art Matters, The Illinois Arts Council and The Faculty Award at Pasadena City College, where she is a Professor of Painting. Her work is represented by Galerie Barbara Weiss in Berlin and Corbett vs. Dempsey in Chicago. Solo exhibitions include The Bonnefanten Museum (Maastricht); Kunsthalle Lingen; The Renaissance Society (Chicago); Harris Lieberman, (New York); and The Santa Monica Museum of Art. Group exhibitions include The 2014 Whitney Biennial (New York); The Kunstmuseum St. Gallen located in Switzerland; Friedrich Petzel (New York); The Hessel Art Museum (Annandale-on-Hudson); The Museum of Contemporary Art (Chicago); Night Gallery (Los Angeles); Gavin Brown’s Enterprise (New York); Mitchell-Innes & Nash (New York); Midway Contemporary Art (Minneapolis); Participant Inc. (New York); Grieder Contemporary (Zurich); and Donald Young Gallery (Chicago). Morris’ work is in the Permanent collections of The Museum of Contemporary Art (Los Angeles); The Bonnefanten Museum (The Netherlands); The Museum of Contemporary Art (Chicago); the Goetz Collection (Munich) and The University of Chicago.
LA><ART’s programs are produced with generous support from The Andy Warhol Foundation for the Visual Arts; The National Endowment for the Arts; The Los Angeles County Arts Commission; Nathan Cummings Foundation, with the support and encouragement of Roberta Friedman Cummings, Dashiell Driscoll and Clea Shearer; The Philip and Muriel Berman Foundation; California Community Foundation; City of Los Angeles, Department of Cultural Affairs; Foundation for Contemporary Arts; and The Anthony & Jeanne Pritzker Family Foundation.

These programs were made possible with the generous support of Brenda R. Potter, the Pasadena Art Alliance, Andrew Pasquella, and an anonymous donor.