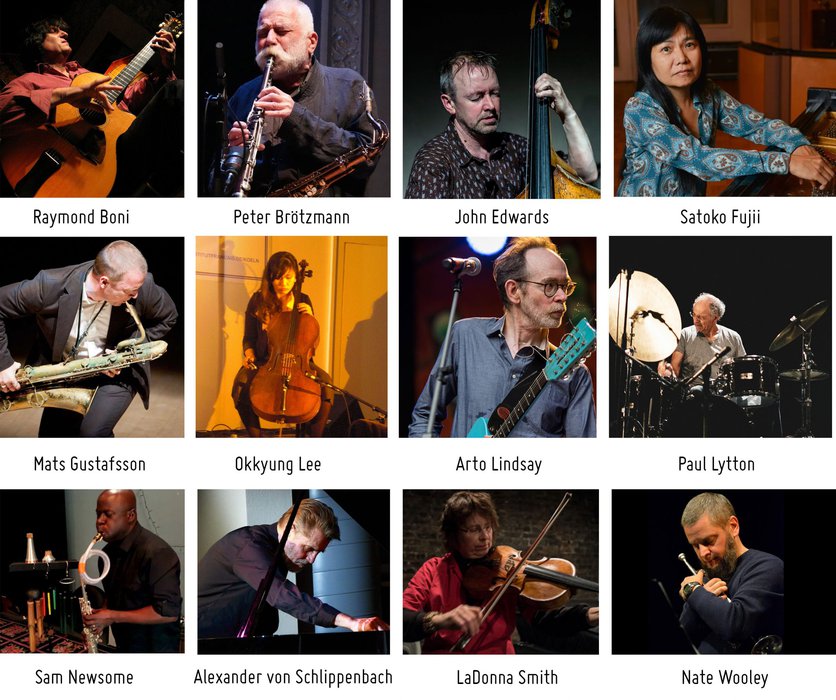 CHICAGO –  The Horse With No Name Presents…..The Instant Award in Improvised Music 2020 Recipients.

This year, in a period of unprecedented turbulence and challenge, the Instant Award in Improvised Music is conferred on twelve respected members of the international improvised music community.  These individuals, who represent a spectrum of ages and diverse backgrounds, have been chosen for their artistic intelligence, independence, and integrity.

Raymond Boni (b. 1947), French guitarist, based in Marseille, working since the early 1970s in diverse settings first with French players, especially André Jaume and Gérard Siracusa, emerging among the second generation of free musicians in France, then ongoing partnership with American multi-instrumentalist Joe McPhee and collaborations with various European improvisors including Terry Day and Max Eastley, instrumental style drawing on early experiences learning from gypsy musicians, melodicism inherent even in the brashest context, but with responsive, exploratory, expansive perspective.

Peter Brötzmann (b. 1941), German saxophonist and clarinetist, one of the most important improvisors of all time, singular voice on the horns with unmatched passion and intensity, recording career starting with cornerstone late 1960s LPs For Adolphe Sax and Machine Gun, both on his own BRO label, soon reissued on Free Music Production, which he co-founded and lent a guiding hand, spectacular discography continues unabated, having documented work solo and in small group settings with virtually every venerable player in free music, including groups Die Like a Dog, Last Exit, Sonore, Full Blast, trios with Harry Miller and Louis Moholo, Fred Van Hove and Han Bennink, and William Parker and Hamid Drake, duet with Heather Leigh, as well as larger ensembles such as the März Combo and the Brötzmann Chicago Tentet.

Satoko Fujii (b. 1958), Tokyo-born pianist and accordionist, forceful and virtuosic improvisor with balance of lyricism and dissonance, introspection and octane, leader of many bands and orchestras including Min-Yoh Ensemble, the Satoko Fujii ma-do Quartet, Tobira, and the Satoko Fujii New Trio, This Is It!, the collective quartet Kaze, longstanding duets with Natsuki Tamura and Joe Fonda, projects with Tatsuya Yoshida of Ruins and Alister Spence.

Mats Gustafsson (b. 1964), Swedish saxophonist, now living in rural Austria, since the mid-1990s one of the most accomplished international creative musicians and central figure on his instruments, the boundaries of which he’s exploded and expanded, working in noise, rock, theater music, electronic, acoustic, electroacoustic, free jazz, and new composition, in many ad hocs, projects, and working bands including Fire! Orchestra, the End, and the Underflow, particular interest in record making resulting in massive discography, formidable record collector and writer on vinyl, including the book Discaholics! Record Collector Confessions.

Okkyung Lee (b. 1975), cellist, born in South Korea, since 2000 based in New York, ferocious improvisor in solo and group contexts, actively seeking out unfamiliar settings from art galleries and museums to tours with noise-rock legends Swans, special interest in site-specific performance works and incorporation of traditional and popular Korean music, brilliant synthesizer of many contrasting inputs and energies.

Sam Newsome (b. 1965), based in New York, teaches at Long Island University’s Brooklyn Campus, focus on solo improvisation and compositions for soprano saxophone including unique preparations on the instrument documented on seven solo soprano records, and multidirectional ensemble work including his trio with Hilliard Greene and Reggie Nicholson (and larger groupings based around this trio), with his Chaos Theory Unit (a saxophone quartet), with partnerships Andrew Cyrille and with Jean-Michel Pilc.

Alexander von Schlippenbach (b. 1938), Berlin-based pianist and composer, student of Bernd Alois Zimmermann, one of the original free jazz and free improvising musicians in Germany, founder of Globe Unity Orchestra (since 1966) and Berlin Contemporary Jazz Orchestra (since 1988), leader of legendary trio with Evan Parker and Paul Lovens, which was founded in 1969, duets with Sven-Ake Johansson and Aki Takase, extensive list of projects including arrangements of the complete compositional oeuvre of Thelonious Monk.

LaDonna Smith (b. 1951), violinist, violist, vocalist, and lifelong Surrealist based in Birmingham, Alabama, wild and razor sharp, since the 1970s one of the foundational figures of American freely improvised music, when she and guitarist Davey Williams founded the groundbreaking journal The Improvisor and TransMuseq Records, for which she recorded more than twenty records of group and solo improvised music.

Nate Wooley (b. 1974), trumpet player, raised in rural Oregon, based in New York City, one of today’s consummate figures bridging creative improvised music with new strategies in composition, fearsome investigator of the outer bounds of his instrument in group and solo improvising settings, acoustic and electroacoustic, also editor of Sound American and curator of the Database of Recorded American Music.

Underwritten by an anonymous patron and musical devotee, the Instant Award in Improvised Music is presented to outstanding improvisors. Previous Instant Award recipients are Susan Alcorn, Joe McPhee, Ikue Mori, and Evan Parker. Corbett vs. Dempsey is proud to be the official mouthpiece for the Horse With No Name.